At the end of October 1990 MT went to her final European Council and found herself isolated 11:1, as so often before. She told the press she was sorry for the eleven.

Returning to London, she delivered her usual statement to the Commons. No.10 aimed to coax a combative performance - not that she needed much coaxing. 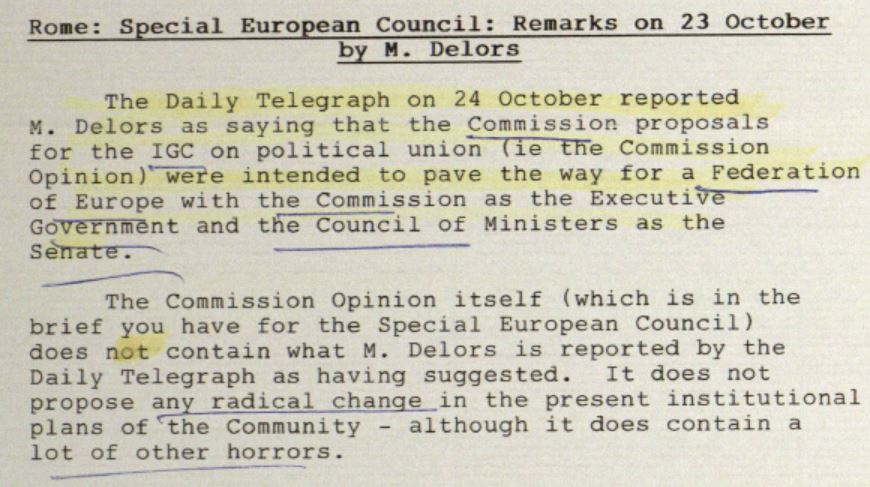 Borrowing a line from Hemingway, MT’s fall from power happened in two ways: gradually, then suddenly. We are finished with the gradual bit.

The Rome European Council 27-28 Oct 1990 had been expected for some time to be difficult, likely leaving MT in the familiar position of isolation, with headlines to match. It still managed to yield a surprise on the downside, the Italians successfully manoeuvring to set dates for the commencement of both IGCs. The line-up was the anticipated 11:1.

We have some significant papers on the Council, including the top copy of a minute from the Chancellor trying to ensure that she stuck to the government’s policy that the Hard Ecu could evolve into a single currency, claiming implausibly that the proposals had “clearly struck a chord” with some countries sceptical of the Delors Committee approach to EMU. There are her speaking notes for the European Council in private session, as annotated by Hurd. The Foreign Secretary was not always given the opportunity to review her remarks in advance on these occasions, so she was evidently trying unusually hard to keep him on board, although her patience seems to have failed, since the final text of the speech ignores most of his points counselling caution. Two of his suggestions give one the flavour of the exchanges: "This shd be for press conference. If the knife is twisted too far in the wound there will be retaliation in other areas" and "NB. We want a good outcome on the Gulf (including German practical help with 7th Armd Brigade) and a peaceful outcome if possible on the IGCs".

Something of her mood comes through from her annotation of the Carli Report on EMU, presented to the Council: NO NO appears in large blue felt tip on p1.

Returning to London, MT’s next task was to deliver the usual Commons statement on the Council, which she did on Tuesday 30 Oct. On this occasion her speech had particular significance, and the briefing file is unusually full, containing material that was probably cannibalised from the folder she she took into the Council itself. No.10 clearly wanted a combative performance, and the previous week Powell had identified a good target, among many: Delors had given a press conference suggesting the the natural evolution of the Community would see the Commission become its executive arm, with the Council of the Ministers its Senate and the Parliament a powerful lower chamber – not a programme which commanded universal support among member states, to say the least, quite apart from British sensitivities, so rather a good straw man in this context. Briefing her for a bilateral with Hurd on 24 Oct (before Rome) Powell commented: “You might also needle Delors about his reported comments on a federal Europe” [this document is from a file at TNA, in PREM19/3340].

The case for needling was all the greater now, given the outcome of the Council, and thus material was put aside for the Commons statement, added to the tabulated folder MT had in front of her on the despatch box, with a yellow label marked “Delors Comments”. Two documents were selected, a press article giving a highly coloured account of Delors federal ambitions for the political union IGC (“British right of veto faces axe in Delors plan”) and a covering note from the FCO rebutting the article (inset on this page), though admitting the Commission’s submission to the IGC, which MT had already seen, “does contain a lot of other horrors”.

These two pieces of paper were the prompt for her famous rejection of Delors’ comments with the words “No no no”, which in turn triggered the events that ended her premiership. MT certainly read them both, underlining words in the FCO letter and lightly marking the press article in a couple of places. Its author was the Daily Telegraph’s young EC correspondent, who has since moved into No.10 himself.

Of course, MT was entirely capable of sounding off about Jacques Delors and European federalism without the assistance of Boris Johnson, or anyone else. And the words "No No No" on the day were wholly owned by her, spontaneous and unrehearsed, the phrase never far from her lips in this and other contexts. But how poignant it is that No.10 chose this particular match with which to light the blue touchpaper.

Was MT misled by the Johnson article? Never knowingly underbriefed since 1925, she knew better than any journalist what the Commission was proposing to the IGC. She seems to have barely glanced at the photocopy in her folder. She didn't really need to. It was there to remind her what many British people were saying and thinking about Delors and his vision. It fell into the broad category of things to be taken seriously but not literally. She was treading a narrow and dangerous path, sympathising with the critics and responding to them, but looking to preserve space to make a deal.

One of MT's predecessors hung a framed quotation from the Book of Job in his bedroom at No.10: "There is a path which no fowl knoweth, and which the vulture's eye hath not seen. / The lion's whelps have not trodden it, nor the fierce lion passed by it". She had often sought that path herself, and many times found it too. But it was to elude her this time.

Finally, nothing turns voters off more than division. Europe is the most promising area for the media to hunt for such. I believe the Prime Minister's formulation on EMU and a single currency is broad enough for all but the fanatics on the two wings to work with.

Ingham contributed more thoughts the following day, writing to Morrison suggesting they aim for “a break with the past 22 months of self-mutilation and bickering”. Morrison then produced a summation document for MT, which listed among its objetives demonstrating “quite clearly to the electorate that … you lead a strong and united Cabinet”.

Howe resigned the followed day, Thursday 1 Nov. One might fairly say the Strategy initiative had been overtaken by events.

There is nothing of consequence in the files on Howe’s resignation itself. Press Digests cover the days from the statement to 2 Nov, registering the shifting mood and shock. The Sun said Howe had been "too disloyal for too long", a phrase he was to turn around and hurl back at his enemies ten days later. Nor are there details in her files on the bitter final days of the Thatcher-Howe relationship, much as we would wish to have them. There are, however, some documents from earlier in the year, telling as to the tense but also complicated atmosphere between them, the outcome not quite preordained. Howe made considerable efforts to set up a private lunch with the Thatchers at his grace and favour home, Dorneywood (given him after she had taken away the much grander government residence at Chevening, much to his chagrin). MT went along, but the event took a long time to arrange, making her a reluctant guest. Her diary secretary, Amanda Ponsonby, was close to both, so did her best to bring them together. MT’s now departed PPS, Lennox-Boyd, had had the same impulse the previous year, believing that Howe very much wanted to get along with MT, that he had a thwarted desire to be treated once again as her closest colleague. And the files also show that MT made considerable efforts for Howe’s wife Elspeth, with whom her relations were famously difficult. They met fairly frequently in 1990 at one event and another, and MT made a point of attending a Guildhall reception for an organisation she ran, which ordinarily would not have commanded Prime Ministerial time (17 May). As with her dealings with backbench MPs and the whips over the summer, MT was trying to keep on terms.

By contrast relations with Lawson were better than might have been expected, at least on paper. It is fascinating, and important, that she was able to bite her tongue with Lawson, but not with Howe. Her relationship with him was simply different. Perhaps for all their quarrels, she felt a measure of respect for Lawson which she did not feel for Howe. She seems to have made a deliberate effort to warm things up with Lawson after he resigned, although she was far from happy with him in private. And not only in private: Ingham did everything he could during 1990 to persuade her to stop blaming Lawson for the troubles of the government in media interviews. (She was very ready to accept that economic policy had gone awry, and to blame that – and therefore Lawson – for the government’s troubles, but made no mea culpa where the poll tax was concerned.) Lawson played his part in smoothing relations. Thus a message reached her via Whitelaw in December 1989 that Lawson was taking a part time private job with a blue chip firm (as mentioned, BZW) and was not going to write memoirs till after the next election. Later Lawson wrote to her confirming his plan and received a strikingly cordial response by letter. There was a similar exchange in October when he sent her a message that he was standing down as an MP at the next election. She wrote a warm handwritten letter of thanks for the information, including the phrase, amazing to see in her hand: “The ERM has gone well”. Sterling had joined a fortnight before.