The period between Howe's resignation on 1 November and his devastating speech on the 13th had something of the quality of a phoney war. There was manoeuvre rather than actual fighting, but one cannot say that things were at peace. 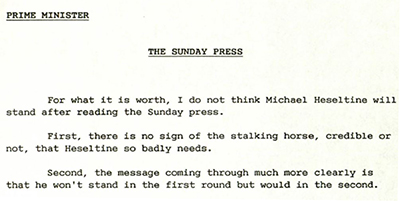 There are only fragmentary sources for the period of uneasy peace between Howe’s resignation and his Commons speech triggering Heseltine’s decision to stand against MT. Initially both Howe and Heseltine stated that they would not stand. But would someone else, perhaps a stalking horse as in 1989? There is no sign that many intuited the actual sequence of events much in advance, that Howe would finally force Heseltine into a contest. Day-by-day new stories and rumours circulated in a kind of phoney war phase, well tracked in Ingham’s press digests.

Heseltine had some problems with his constituency party in Henley, generating many press stories and accusations of dirty tricks by CCO; it was suggested it was fomenting trouble for him. Indeed the files show there was some contact between Henley Conservatives and No.10, via MT’s constituency agent, Mike Love, who sent a note recording a conversation with his opposite number there, noting that the local executive had a majority of 5:4 in MT’s favour, and that the president of the local party was strongly vocal in her favour. By the look of it, Love was reporting what he heard rather than initiating interference, but it is striking to find such contact all the same.

Immediate attention in No.10 went into her speech for the Debate on the Address, a characteristically combative performance. The Treasury wrote to No.10 warning sternly against her saying anything in the speech to hint that interest rates would be cut again soon, which she would have loved to do. They even supplied a form of words for the Prime Minister to recite. She did not use exactly those words, but essentially she did as she was told. Power was shifting, had already shifted, in significant ways from her to Major.

The Policy Unit contributed a long memo on “Policy Groups” (7 Nov), seting out its own “recovery strategy”, looking to have enough policy work completed to announce the outlines of manifesto proposals at the Conservative Central Council meeting in March 1991. She gave the document a preliminary look, but put off giving a full answer till “after Monday”. It seems doubtful whether she ever did return to it. We are that close to the end now.

On 9 Nov MT attended a long scheduled lunch with top people at the BBC. Ingham briefed her at length (he was also attending) and revealed that he had had “very hard words” with John Sergeant and John Harrison, blaming the former especially for “disgraceful journalism in forecasting a challenge to you on the basis of gossip”. After the lunch Ingham sent MT a note of a side conversation he had had with John Birt, the BBC deputy director-general who was host of the event. Birt indicated that if no leadership contest materialised, John Sergeant would be in serious trouble. Things worked out otherwise, of course: MT's fall proved to be something of a career highlight for Sergeant.

In similar hanging mood on 11 Nov after reading the Sunday Press Ingham told MT that he thought Heseltine would not stand. “Having said all that, the press is doing its best to stir up a challenge”.

On Tuesday 13 November MT remained in the Commons after PMQs to hear Howe’s speech. She was wearing what her clothes diary called her “Navy Gorbachev Suit” (see inset on next page). Charles Powell recalls that they had heard in advance Howe would be even wafflier than usual, but when the truth was revealed she felt immediately that a fatal blow had been struck. Afterwards Ingham sent her a photocopy of the actual notes that Howe had spoken from, with handwritten amendments – the way it reached Ingham is unclear, but it is known that Howe gave a copy to the Hansard Office to aid them in their transcription. MT filed it carefully. Another copy was found in the Parliamentary offices of the Press Association and sent for archiving to Cambridge decades later.

Since the beginning of the final crisis MT had been receiving a stream of letters and messages of support, of flowers and gifts. The quantity now picked up. Ministers and whips in the Lords sent flowers, and Lord Mackay, the Lord Chancellor, sent a tribute separately. By the time she departed No.10 the place must have resembled an overstocked upmarket florist. There seems to have been nothing from ministers in the Commons. Among the notable letters was one from her former Private Secretary, Tim Flesher, who wrote that he had “listened with horror” to Howe’s speech, and also a long one on 13 Nov from Chris Butler, the MP for Warrington South who relished the coming of battle over Europe. It has echoes of the tragic letters one finds in the files of British politcians dated July 1914, a longing for resolution without a whisper of insight as to what that might actually mean:

Last Saturday I was at the North West Women's Conference, and I opened up by saying that I felt it was a good thing for the country that the debate had begun about where we going in Europe, because there were two clear choices – between a Europe of Nations benefitting from a single free market, or a federal Europe with a single currency, a single Budget, a single Treasury, and an emasculated control of taxation. This choice had been papered over for too long, and unless it was decided which path to take we would slide into a European super-state without the British people ever having been consulted.

Heseltine declared his candidacy for the party leadership on Wednesday 14 Nov. There is a note to MT from one of her Private Secretaries giving a critical account of Hurd’s response to the news on the BBC that lunchtime, giving Major by contrast high marks. She seems to have viewed Hurd at this time with particular suspicion. A later document records her saying she did not want him to succeed her because she did not think he would “hold to the things she believed in”. She bracketed him with Heseltine, effectively.

Apparently unsolicited, party chairman Ken Baker speedily sent her a document titled “The Theme of the Campaign”, invoking the names of Tim Bell and Gordon Reece, friends and advisers to MT of very long standing. This contained far more than thematic advice, it laid out an entire strategy – no personal attacks on Heseltine, no big appearances as “the candidate”, the campaign to be fronted with notably left-leaning ministers (Clarke, Patten, Hurd, Major), a younger and broader campaign team, a willingness to listen carefully on the Community Charge and be “prepared to consider significant changes”.

Ingham was not able to take part in a party campaign, so preparation of material for the press fell to Morrison and others in the Political Office and Policy Unit, notably Griffiths’s deputy, Robin Harris. There is an unimpressive effort by Morrison on 14 Nov titled “Bull points for the press”, implausibly asserting that her entire cabinet backed her and the great majority of senior backbenchers likewise, along with a notably defensive section about Europe.

MT’s gave a series of press interviews during the first ballot campaign. Harris and Whittingdale prepared the briefing for these, which show an approach very different from that recommended by Baker. Far from avoiding personal attacks on Heseltine, their briefing assailed him as a socialist. This was certainly a lot closer to MT’s actual position than the party chairman’s suggestion, although plainly she understood the tactical argument the other way. Following an interview with the editor of The Times, Simon Jenkins, in which she laid out chapter and verse of Heseltine’s interventionist instincts, after considerable hesitation she opted to remove all but one direct reference to him in an article she put her name to for the Daily Telegraph, shamefacedly telling Whittingdale that she “altered this yet again slightly". Something of the hectic atmosphere at this moment breaks through in an over-the-top suggestion of a “scorched earth” strategy against Heseltine from a special adviser, which even its author must have seen could not work, so extreme it might almost be tongue in cheek, and an unsigned document probably by Harris providing chapter and verse for the claims MT made in The Times interview, dated on the day it was published, unmistakably defensive in style.

On 19 Nov Morrison sent her, by now in Paris, advice on lines to take after the ballot result, cleared in a meeting of senior colleagues in London. This included a draft not far off what she actually said when she came down the Embassy steps. It also set out what she would have said had she won a sufficient majority on the first ballot:

I am very pleased to have won the election for the leadership of the party. Now that it is in the past, I want to make two points quite clear.

First of all, I wish to thank all those who both supported me in the ballot and worked on my behalf during the campaign. And, second, I hope that now the leadership contest is behind us, we will unite and work flat out for a Conservative victory at the next general election. That is the task upon which I now intend to concentrate.