The fightback plan involved joining the ERM, which finally took place on 5 October. The timing was nakedly political, designed to take the political world by surprise and to discomfort Labour.

But the initiative yielded no real gain to MT, predictably enough perhaps. 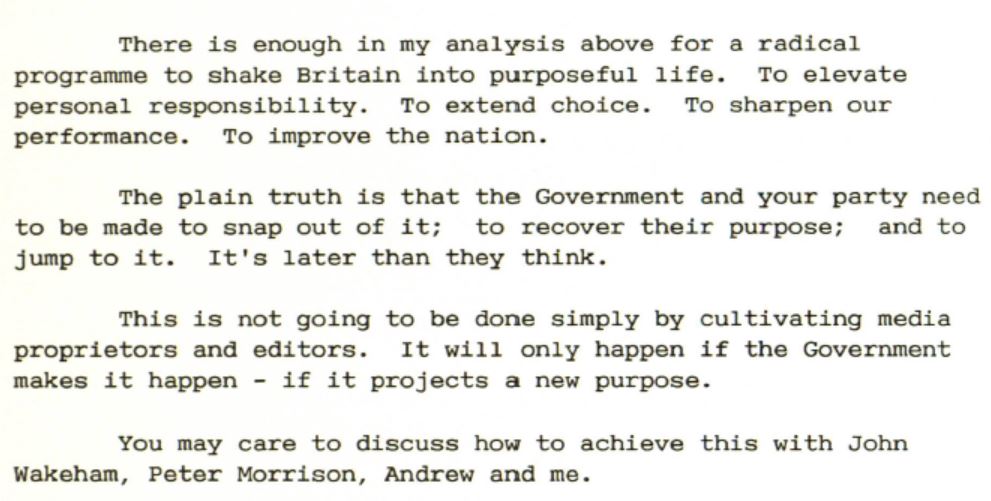 The Bruges speech of September 1988 now seems to many a harbinger of later things, the beginning of the road to Brexit, although the reality is more complex. There was talk in 1990 of a follow-up, ‘Bruges II’, a speech to take the issues forward into the new era following the fall of the Berlin Wall, and in fact originally the Aspen speech was to be it.

But the idea fell away. This was not due to the outbreak of the Gulf War, which made no difference to the speech – a few lines were added merely, and there was concern that it should not be hijacked by the crisis. Rather, Bruges II seemed the wrong theme for an American audience, too narrow and also in truth not what they wanted to hear. The timing was wrong too. By this stage MT was moving towards ERM membership. Not only did she have no choice in the matter, joining the mechanism was actually part of her fightback strategy.

There are documents showing that what one might call ‘Eurosceptics’ were disoriented in 1990, like her uncertain where to go. In May Alan Clark invited himself to see MT to offer her some thoughts on Bruges II. He had welcomed the original speech, and understood better than most what it might become. But on this occasion he appeared as an advocate of Britain joining the Single Currency and supporting a European central bank. Nor was Jimmy Goldsmith in a position remotely like the one he later occupied as leader of the Referendum Party. He saw her too, in July, and was talking at this time of "the European imperative".

The Aspen speech then did not revisit the Euroscepticism of Bruges. Rather, MT repeated her formula of Britain’s destiny lying in Europe, without the qualifications about European superstates, etc, and launched her proposal for a European Magna Carta, to which she returned in her last summit speech at Prime Minister, to the Paris CSCE in Nov.

Entry to the ERM took place on 5 October 1990. MT wrote a formal letter to Neil Kinnock notifying him of the decision, one of the few aspects of the whole thing she found truly satisfying (along with the 1 per cent cut in interest rates she extracted from the Treasury as the price of her final approval). ERM entry certainly undercut the whole trend of Labour’s economic argument and left the Opposition with embarrassingly little to say. But in other respects, after a single good day of coverage, ERM disappointed, as Ingham had no choice but to acknowledge. MT’s long standing opposition to entry meant that the decision was seen, not unreasonably, as a triumph for Major and Hurd at her expense. Entry had been trailed for months, so was to a significant degree “priced in”, both by the markets and public opinion. Conservative support in the polls actually fell, with Labour as far as 20 points ahead in some, the government down 4 per cent on September. The press instantly moved on, Ingham ruefully telling her: “having spent years trying to get you to take Britain into the ERM they now discover that it is not a panacea and is no substitute for economic self-discipline”. In truth, he was the last person who should have been surprised.

The Conservative Conference followed in Bournemouth, the Policy Unit argument for making it a launch pad for the next election having been effectively rejected. MT made a speech best remembered now for her recitation of Monty Python’s dead parrot sketch, directed at the Liberal Democrats whose logo was a bird and who had prominently employed John Cleese in some of its PPBs. One line that mercifully ended up on the Prime Ministerial sitting room floor was from a special adviser: “I Do, Ron Ron”. (MT assured him she would try to use it later.) For all the relative lack of content – by Thatcher standards – the speech still went through fifteen drafts, although her files contain none of her own marked up texts unfortunately.

The week after conference, on 18 Oct, the Conservatives lost the by-election caused by Ian Gow’s murder. Eastbourne was taken by the Liberal Democrats with a 4500 majority, only days before his memorial service. MT pronounced herself “very sad, very very sad”. Defensive briefing about the result was sent her from the party chairman which ended with a grotesque reference to the conference speech: “The parrot has twitched!!” She had not understood the original joke, and she certainly was not in a mood for laughing now. Later she received an angry report about the Eastbourne campaign from the defeated Conservative candidate, who told her that Conservative Central Office had been responsible for arguing that anything less than a large Conservative majority would be a victory for terrorism, with highly counterproductive results electorally. Whittingdale was sceptical of the candidate's claims to have been a pawn of CCO, but MT wrote personally to say his report “came as a revelation”. She was certainly sensitive on this point herself: she had refused outright at the beginning of the campaign to send a letter to every elector in Eastbourne paying tribute to Gow, writing “It is a gimmick and would do us more harm than good".

At this low point, yet another low, Ingham sent her a long minute on “Presentation Post-Bournemouth/Eastbourne”, which kicked off a late strategy initiative, the last of so many during her Prime Ministerial term, involving Turnbull, Morrison and Wakeham. The minute had many criticisms to make, and it upset MT (Ingham’s diary records he was told by Morrison it gave her “a sleepless night”).

The plain truth is that the Government and your party need to be made to snap out of it; to recover their purpose; and to jump to it. It's later than they think. This is not going to be done simply by cultivating media proprietors and editors. It will only happen if the Government makes it happen - if it projects a new purpose.

The whole file on this initiative is worth studying. One interesting aspect of it is that Whittingdale and the Policy Unit were not involved, nor Powell. During MT’s last year No.10 was showing signs of fragmentation, distance emerging between these three component parts of her immediate circle, the machine beginning to struggle under extreme personal and political pressure. It is less that the components were at each other’s throats – there was tension, but not open warfare – rather, they look almost to have been working separately, with different perspectives, even different goals in some measure. One thing they did not do was leak about it.

Alarmed at the outlook and at her isolation in cabinet, doubtless primed with intelligence from the inside, MT’s friend and former adviser John O’Sullivan sent her a memorandum urging that she make Norman Tebbit Education Secretary, not knowing that a reshuffle was shortly to happen anyway creating a vacancy in that very post. Tebbit was indeed approached to take it, but he refused to rejoin the government.