MT in official files from 1992 - dealings with the new PM

Among the many bulky files in John Major's archive from 1992 is a rather slim one entitled "Prime Minister's Meetings with Rt Hon Margaret Thatcher" ... 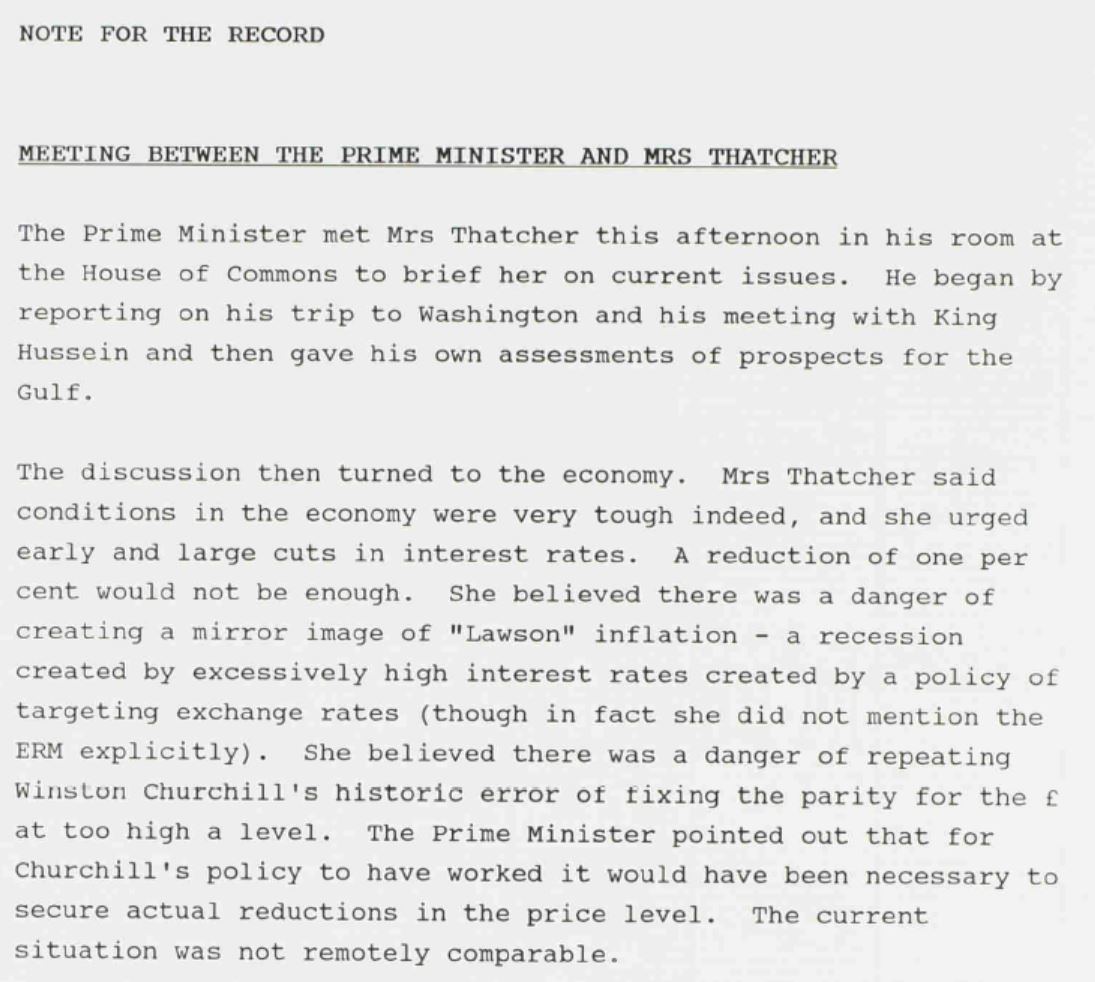 The first item in John Major's file on meetings with MT is a long handwritten letter from him to her on Boxing Day 1990. You might call it "an old-fashioned political letter", the kind that began to be killed off when Alexander Graham Bell invented the telephone in 1876.

Anachronistic or not, it is a good letter, full of content, historically significant. The Prime Minister set out in detail the fundamentals of his position on the Gulf, and reported that of George Bush. Quite explicitly they were readying themselves to reverse Saddam's invasion of Kuwait, by force if necessary - and they were clear it would be necessary too. Common ground traversed, Major then moved to a topic where he and MT were more at odds. "The Community Charge is looking as bad (if not worse) than we feared", he warned, stressing the limited scope for fiscal manoeuvre. On education and health he asserted a determination to continue her policies, in fact implied that she had not gone far enough. "Indeed in some areas such as Education I wish to push it further - we MUST press ahead with the Health reforms". MT had had moments of severe doubt about the latter earlier in 1990.

Ending with the hope that she and Denis had had a lovely Christmas, an unlikely event, the letter was written as a preparatory step to a meeting between them in the New Year. But that it was written at all surely suggests something uneasy between the two of them. Why had he not rung her up - a friendly confidential call from Chequers?

In any case a meeting was arranged in early January, with Charles Powell the intermediary. Powell had stayed on at No.10 when MT left, for very good reasons - with war in the offing it would have been perverse to change both the PM and the PM's closest foreign policy adviser at the same time. His staying made the point also that he was not her man exclusively, that he was an official, however close they had been, not some kind of political appointee. Such things mattered to Whitehall. One senses though that the relationship between them could not be the same. He now had access denied to her, remaining at the centre while she was exiled. As long as her relations with Major remained good, there was perhaps no real issue, but if they worsened, difficulties would surely arise for Powell too.

The file contains briefing for the meeting and then a record of it, almost as if Major was seeing a fellow head of government. The briefing, by Powell of course, shows No.10's concern about MT's foreign trips, which were going to increase in number as her new office bedded in. She was hoping to see President Bush and even to visit Saudi Arabia in January and February 1991: it looks as if pressure was being applied to persuade her to revise those plans, and indeed neither came to pass.

The conversation record itself suggests, sadly, that the meeting did not go well. The two clashed almost immediately on the ERM, where MT had abandoned any pretense of commitment to the position she herself had adopted only three months earlier towards the end of her term when we had joined the system. She attacked the rate at which we had fixed sterling to the DM, comparing the policy to Britain's return to the Gold Standard in 1925. Major seems to have been quite stung by this comment, replying sharply that the "current situation was not remotely comparable". He then moved on to make what reads like a critical point about her tendency to snatch any opportunity to reduce interest rates, suggesting it would be counterproductive in current circumstances. These exchanges were, in effect, a continuation of the arguments they had had when he was Chancellor of the Exchequer and she was PM.

From there they moved onto really difficult territory - or what one would have thought would have been, the Community Charge. Major laid out the painful problem that the charge was going to be introduced at a general level double that which ministers had envisaged when the proposal was first made - £400 versus £180-200. And here MT showed the move that she would very likely have made to defuse the charge had she remained in office - shifting responsibility for education, and the associated expenditure, from local to national control. Major's spoke as if his mind was moving in a similar direction, although in fact outright abolition of the Charge was to be his policy, announced in March 1991. Unspoken between them was the question of how any kind of shift of the burden from local taxation to the centre would be financed? A two point five percent increase in VAT was the mechanism adopted, reducing the charge by £140 and also ensuring that the Council Tax, which replaced it in 1993, was levied at politically bearable rates. In this way, by leaving much unspoken, the Community Charge element in the conversation was defused.

There were several further meetings in 1991 of which no formal note was made, perhaps a good sign. One on 31 January was preceded by an awkward exchange about the possibility of the PM's attendance at a ceremony to confer the Freedom of the City of Westminster on MT, No.10 taking great pains over tiny details for fear of giving hurt to her. They met again on 1 June, the PM carefully briefed with telegrams relating MT's recent visits to South Africa and Moscow. Major's jottings on their talk suggest he opened the conversation by asking MT to recount her South African trip, a safe topic one would think, though they soon moved on to more difficult ground - the coming publication of Nick Ridley's study of Thatcherism, My Style of Government (which appeared that July), which had some critical things to say about Major. They talked too of the EC - of past and future arguments. Major's note does not suggest a showdown on the issue. Though the Maastricht Treaty was only six months away, MT was sufficiently onside at that time publicly to praise Major for having done 'brilliantly'.

The final meeting in the file was on 6 February 1992 and one senses that the mood had darkened. With Parliament well into its fifth year the next election was now very close, so there was a strong external pressure to avoid any kind of a row, and yet the very fact that they were meeting had been leaked to the press - "not needless to say from our end" remarked Chris Patten. A briefing for Major by Powell's successor, Stephen Wall, noted that MT had been privately critical of British and US policy "for not doing enough for Russia", despite praising British policy in public. Although the British government had "done what she wanted in recognising Croatia", for which MT had called publicly in an interview for Croatian TV the previous December, Wall was surely right to conclude "I doubt if you will want to raise Yugoslavia".

And there the file ends. Following the election, in April 1992, MT swiftly moved into a position much more critical of Major and his government as the ERM crisis, the ratification of the Maastricht Treaty and the war in Bosnia provided combustible material on quite a scale. It is perhaps no accident that the file ends at this point: with hindsight the period between her fall in Nov 1990 and the election of 1992 was quite distinct. The proximity first of the Gulf War then of the vote enforced restraint in their dealings, while her personal life took much of this time to recover from the loss of No.10 - the loss not only of power, but of occupation and home. By early 1992 the losses were made good, so far as they could be. She had a new home, a new office and a busy schedule divided fairly equally between foreign travel and memoir writing. She now had the means to play the role almost inescapably hers, as the guardian of Thatcherism, one that brought her frequently into conflict with the government. There was a personal element to all this, of course, and yet finally the forces in play were much larger. On the evidence of this file, Major cannot be faulted for his personal treatment of MT, nor were her actions motivated by small things.