The year was extraordinary, but until the very end the machinery ran pretty much as normal.

Life at No.10 went on for MT, until quite suddenly it stopped dead. 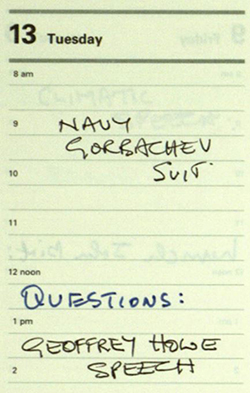 In her last term as Prime Minister, MT became, in a modest way, something of a clothes horse. Of course, clothes had always mattered a great deal to her, as we know from the correspondence she exchanged in the 1940s and 1950s with her older sister Muriel, unearthed by Charles Moore in volume one of his biography of MT. She loved to make clothes, buy them, talk about them - above all, wear them. And she noticed what other people wore too, always.

But clothes had a new significance for her, a political as well as personal value, after the trip she made to Moscow on the eve of the 1987 General Election. She consciously made a show on that occasion, persuaded by the prospect of a television spectacular beamed into Soviet and also British homes And the visit did not disappoint. Gorbachev did her proud, for his own reasons of course, seeing that Soviet and wider attitudes could be moulded by such a mark of glasnost, with half an eye particularly on the Reagan White House with which MT was so well connected. You might almost say, improbably enough, that dressing up became part of MT's Cold War diplomacy, a tactic to help wind it down peacefully. Gorbachev famously mounted charm offensives, with considerable success in the West. Standing alongside male world leaders dressed in boring dark suits, cameras on every side, MT seized her chance to pioneer the glamour offensive.

It had to be done on a budget. The British government does not provide its leader with a clothes allowance. She proudly bought her own, but resources were finite and it was essential to make best use of what she had got, and above all, to avoid the deadly line in some press article: "Margaret Thatcher appeared again in her favourite blue jacket". Clothes would be worn many times, naturally, but with care taken to vary place and purpose, accoutrements and adornments. And for that reason, good records had to be kept of what had already been worn and when.

And so "the clothes diary" was born, maintained from 1987 by MT and her closest staff, particularly Crawfie (Mrs Cynthia Crawford) in plain A4 bound volumes. The 1990 one was embossed 'exodus', ironically enough.

The system becomes clear as one reads it. The diary seems to have been mainly if not wholly a record of past outfits rather than of outfits yet to come. It was not primarily a planning tool, that side of things being done in jotted additions to the minute by minute schedules made for MT's foreign trips, often in her own hand. Not every day merits an entry, although we can be sure MT did wear clothes every day. Perhaps the omissions were of days when she was not going to be seen in public or by those outside Downing Street. Holidays are certainly omitted, when perhaps she let herself dress down just a little. Interestingly in 1990 sometimes the diary records what she wore to cabinet meetings, as if her ministers were not quite insiders. Events suggested they were not indeed, from her point of view.

Outfits needed names, clearly. How to choose these? Here the psychology of the diary becomes interesting. A few outfits, stand-out items, were named for the most memorable person she had met wearing them. And only certain people, certain men, were worthy of the honour. Appropriately enough, Gorbachev gets pride of place in the naming stakes. There was a "Pink Gorbachev" (made by Chanel) and a "Navy Gorbachev", and sometimes one she simply called 'Gorbachev', which was perhaps a third or simply her favourite between the first two. She visited Moscow in June 1990 and met the man again, from which the diary shows that according to her system you did not wear Gorbachev when meeting Gorbachev. Perhaps that would have been too much, and besides, the press would notice the reappearance of the same garment - as would Mrs Gorbachev, famously no slouch in the clothing department herself. So on that occasion he got "Navy Crepe Suit/Trimmed Cream" and "Venice III". A new Gorbachev seems to have come out of Moscow, "Turq(oise) Silk", which incidentally was the dress she had worn the month before at DT's 75th birthday dinner, so presumably a favourite of her husband's.

President Reagan had at least one outfit named for him in the 1990 diary (Reagan Pink), but his successor was not so lucky. Her most memorable meeting with President Bush in 1990 was at Aspen in Colorado at the start of August, where they learned that Saddam Hussein had invaded Kuwait. The striking suit she wore at the press conference they jointly gave on that occasion on a lovely meadow at the Cattos' Elk Mountain Ranch was named "Basketweave Green" before the event, and it stubbornly remained so afterwards. When later she changed for dinner it was into "Pink Aspen", a new dress named after the place rather than the man. For their working breakfast on 19 November 1990, the day before the first ballot, she wore her "Black dull suit", which may well have been indicative of her mood as much as the company, of course.

Mitterrand was another one who did not get a suit, although she liked him well enough and he treated her with a certain gallantry. Whether tempted or not, the Valentino dress she wore at their summit in May 1990 was named for the place, 'Waddesdon', the spectacular Rothschild mansion where they met. As for Kohl, need one ask? Endearingly the diary contains quite a few spelling errors, and Kohl's office is mis-stated at one point as well. In fact the only other man to get one named after him in 1990 was TV interviewer Terry Wogan, whose popular chat show she appeared on, after much hesitation but with good results, in January. 'Wogan' (also known as "Wogan Burgundy") came in a long and short form, presumably with reference to the skirt she wore with it. She wore 'Wogan' to a grand dinner at the Bank of England, which would surely have surprised the Governor and his minions if they had known it. And when in January 1990 she stood for the cameras at the bar of the fictional Rover's Return on the set of Granada TV's soap Coronation Street sipping a bitter lemon, the gritty northern cast was secretly being treated to "Pink Chanel Gorbachev". The woman was a radical at heart.

Not everything was high political glamour. MT needed to reach an electorate much of which took no account of diplomacy or what she wore, something she knew well enough. The diary team at No.10 put continuous effort into creating photo opps for them too, often on MT's Friday trips outside of London, events that got a lot of local press coverage as well as national. Emblematic in its way was one on 31 May, a trip to the Abbey Road recording studios, made famous by association with the Beatles whose album Abbey Road featured an iconic photo of the Fab Four walking over the local zebra crossing.

Planning for the visit began badly. When No.10 first got in touch with the studios, the call was dismissed as a hoax. Having established that it wasn't, security prevented studio management telling anyone who was coming, wrecking No.10's plan that MT should meet "a pop star" (tellingly MT's Private Secretary put the term in inverted commas). Roger Daltrey and Kate Bush were talked of, but they were not going to hang around in the studio on the off chance of meeting some unnamed person of importance, so eventually MT had to settle for Mike Batt of the Wombles.

The Wombles of Wimbledon Common was a charming BBC television children's show depicting the uneventful lives of a fictional race of furry creatures with long snouts who supposedly lived under the Common in a kind of giant burrow.They collected litter, which was a cause close to MT's heart, but aside from that, it was not altogether obvious what she would find to say on this topic. Dutifully, briefing was prepared by No.10 on "the Wombles of Wimbledon" (sic), including the first verse of their famous theme tune, a top ten hit for Mr Batt who had formed a modestly successful band called the Wombles, whose members sang in giant furry outfits which must have been a nightmare to wear under studio lights:

Overground, underground, wombling free, / The Wombles of Wimbledon Common are we, / Making good use of the things that we find, / The things that the everyday folk leave behind.

Mindful of dignity, MT looks to have been suspicious of the whole thing. She tried to set some limits at least. Asked whether she wanted to play Ringo Starr's drums, she dismissed the idea as "too gimmicky". But on the day, as always, she did her best. There was one unforced error: she walked over the zebra crossing for the photographers, going right to left, the opposite way to the Beatles and therefore definitely the wrong way for the photographers. (Much more streetwise, David Cameron did not make the same mistake when he went there.) Perhaps in mitigation, she picked up Ringo's drumsticks after all, and characteristically did it with gusto, thumping away for the cameras. And the meeting with Mike Batt went surprisingly well. They bonded over a shared dislike of the Musicians' Union. Later he wrote her a letter from his office at Belfrey Productions offering to continue the conversation, but she had had enough wombling and politely declined. She was grateful for the gift of some Wombles CDs, which seem to have been destined to find their way to a small boy in Dallas, her grandson Michael.