At the start of 1989, the Conservative Party stood high in the polls, often registering leads in the double digits. Its leader dominated domestic politics to an extraordinary degree, a weathermaker even in the eyes of her opponents, and enjoyed an international profile at least as high, if not higher, than any British politician since Churchill.

By year’s end, much – perhaps most – of that had gone. The story of 1989 is of the process by which apparent mastery slipped away, opening the way to the end of the Thatcher government before another year was out. The unravelling was a complex business, inherently impossible to predict and not altogether easy to explain even now.

INTRODUCTION: "a lot of fires burning at (the) moment" 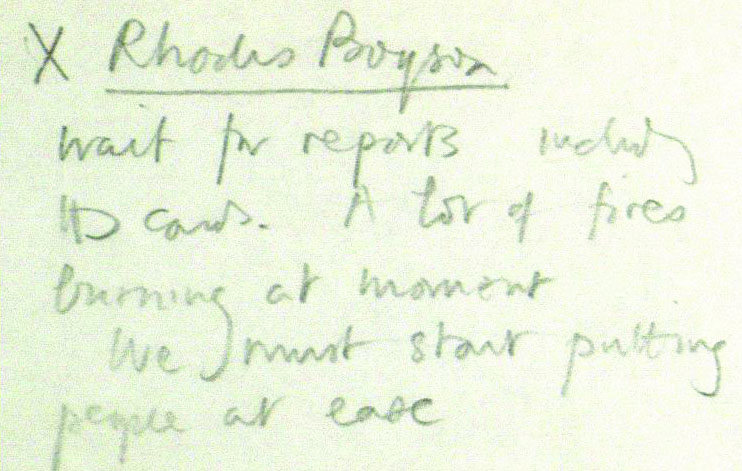 Advice from the backbenches
"We must start putting people at ease"

The best starting point perhaps is the sheer number of issues that confronted the government in 1989, interacting unpredictably and with damaging effect. An angry backbencher summed the problem neatly enough at a meeting in April: “a lot of fires burning at (the) moment”, concluding with the all too simple suggestion, oddly reminiscent of Deng Xiao Ping: “We must start putting people at ease".

But how, when the simultaneous fires included the Community Charge, the NHS Review, water and electricity privatisation, and football hooliganism, not to speak of high interest rates, record trade deficits, and the greatest, the most unquenchable, fire of all – Europe?

The problem was not merely one of policy. MT’s relationships with colleagues in government and the backbenches, with officials and commentators, and with the wider public, were an important issue too.

Even the arc of history, so often on her side, as conscript or volunteer, was beginning to seem unhelpful.

Do something - backbench view of the Community Charge, Dec 1989

The Thatcher Government’s third-term programme was among the most ambitious of any government in memory, the product of a manifesto sketched in the long aftermath of Westland. That crisis had left MT with a sense that time was running out, and also that her tenure ultimately relied on pushing onwards and upwards. She continued to feel this even after receiving her third mandate at the 1987 General Election, choosing in Jan 1988 to add the massive and dangerous task of NHS reform onto a legislative programme already creaking with big bills enacting manifesto pledges.

The programme proved colossally overloaded, a political error registered best in this release by records of MT’s meetings with the Chairman of the 1922 Committee and its Executive. (She and/or her PPS often saw the former separately first, the better to manage the latter.) The Community Charge and the NHS Review caused the greatest grief, with water privatisation not far behind. Talking privately of the NHS reforms the Chairman put it in understated style: “programme overloaded … pity if we had bitten off more than we could chew”. It would have been a pity indeed, particularly for her.

Health Secretary Ken Clarke was a particular focus of backbench concern, perceived as too aggressive in his tactics with the medical profession. MT defended Clarke, who she had given the job in 1988 partly because of his battling instincts, but the Chairman of the 1922 warned her: “In the end we will have to bribe the doctors”.

The Community Charge darkened the scene for the entire year, but particularly in the second half as actual numbers became available for the first year’s charge in England. Naturally enough MPs looked very hard at what was happening in their own seats. On 11 July MT’s PPS, Mark Lennox-Boyd, sent MT a private analysis of the impact house by house on several streets in her constituency, including Ballards Lane where the local party had its offices. She knew it very well; she held her surgeries there. It was not a glamorous address – no wealthy suburban idyll – but the numbers were horrific: two person households stood to lose an average of £172 each. Of 22 houses, 8 gained, 14 lost, and the losers would lose much more than winners would gain. Later that day she saw the 1922 Executive and made her usual case for the charge, but clearly with limited effect. Two days later at the 1922 itself there was a painful discussion, in her absence, Lennox-Boyd sending her his notes. MT’s Principal Private Secretary, Andrew Turnbull, was shown them as well and made a comment which went to the core of the problem: “They [the MPs who spoke] are not accepting the basic premise of CC [the community charge] – that voters in every local authority should be made aware of the consequences of that authority’s decisions and should take appropriate action at the next election”. MT based almost every argument she made on first principles, but not only had she failed to secure agreement at this fundamental level with respect to the Community Charge, it is doubtful the principles were even understood. One finds a similar problem in respect of water privatisation, where many Conservative MPs literally did not see the point.

There was more in-depth analysis of constituency impacts of the Community Charge in a highly secret report sent to MT while she was at Balmoral in early September by the new Conservative Party chairman, Ken Baker. Ten marginal seats were analysed, though she alone of the seven ministers to whom it was sent was told which they were, a precaution against leaks which was not calculated to diminish alarm. Dulwich was among the ten. Again, the numbers were terrible. Even on the most optimistic assumption losers outnumbered gainers more than 4 to 1. On worse assumptions the ratio was more than 7 to to 1. Baker told her: “I fear that it makes rather bleak reading. It is the worst position, but it’s the one we will be defending in the Spring, unless we can do something”.

And really it only got worse. There is more awful material in December, with Baker and Chris Patten (Environment Secretary since July) in full fire-fighting mode. The unbelievable complexity of the charge compounded its problems. Baker remarked after one of these meetings: “I think there is some confusion in this group as to what should be done, but I have no doubt that they all felt very strongly that something should be done”. The Baker-Patten line was that 1990 would indeed be ‘difficult’, but everything would be “much smoother” in 1991, when the transition phase ended. Did MT truly believe that herself? When Whitelaw told her much the same thing in private conversation at the end of September, she had replied pointedly: “NL [Lawson] strapped for cash”.

Some MPs were taken by the radical idea that the Exchequer should assume responsibility for teachers’s salaries, a position firmly rejected by the government at the time, but similar to one that MT herself came to accept and urged on her successor privately in Jan 1991. But by then the charge itself was doomed.